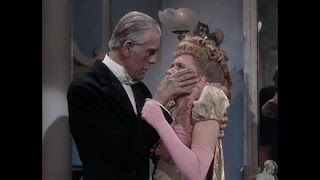 I was really hoping to like The Climax, partly because of its ridiculous name, but when I prepared to watch it, all I knew was that it starred Boris Karloff. I had no idea that it was originally supposed to be a sequel to the much maligned 1943 Universal version of Phantom of the Opera. When Claude Rains declined to return and other things fell through, Universal simply re-imagined this as a stand alone film, but it has essentially the same plot as their remake of Phantom of the Opera.

Dr. Hohner, the Vienna Royal Theatre’s on staff physician, was once obsessed with the Opera’s star soprano. When she refused to give up her career and sing only for him, he murdered her. Years later, a new star, Angela, arouses similar feelings in him. Though she has a fiancé, Hohner attempts to hypnotize her so that she can only sing for him. When this fails, he is determined to murder her like his past love.

When Boris Karloff is on screen, this isn’t actually a bad film. It’s essentially a psychological thriller and he brings out as much of his suave creepiness as he is able for the role of Dr. Hohner, which is basically a shadow of his chilling performance as Hjalmar Poelzing in The Black Cat (1934). Unfortunately though, Karloff does not have as much screen time as is necessary to make this a good film and we are forced to sit through a lot of very talkie love scenes and numerous scenes of singing, a la the Phantom remake. Susanna Foster, who played Christine in that film, returns and plays exactly the same role here. Jane Farrar also returns from Phantom; in both films she plays the older diva forced to retire to make way for the younger, upcoming star.

Turhan Bey, the strange looking leading man of Universal B movies in the ‘40s, plays Angela’s scenery chewing fiancé. He goes so far as to actually chew up a program, because his rapture at seeing her performance is so intense. I’ve asked it before and I’ll ask again: why are all the male characters in these Universal horror films so creepy?

The film does look fantastic, thanks mainly to the Technicolor process and sets from the original Phantom of the Opera, which were recycled for the 1943 remake and for this film. The Climax was nominated for an Academy Award for Best Art Direction, which seems an odd choice despite the fact that the film looks lovely. It is sort of reminiscent of Britain’s later Hammer Horror output, full of ornate drawing rooms and elaborate gowns.


I can’t recommend this film, but I can’t really decided whether or not this is better or worse than the 1943 version of Phantom of the Opera. As I said earlier, both films suffer from a shortage of horror and an abundance of singing and melodrama. Despite two compelling leading men/villains (Claude Rains in Phantom and Karloff here), these represent two of Universals least interesting efforts from the early ‘40s. One wonders what George Waggner, director of the acclaimed Wolf Man, did to get this assignment. Upon its release, The Climax was a box office dud and time certainly hasn’t done it any favors. This is available in the Boris Karloff Collection aside a wide range of some of his more obscure films, including Tower of London, The Black Castle, The Strange Door, and Night Key.
Posted by Satanic Pandemonium at 9:23 AM